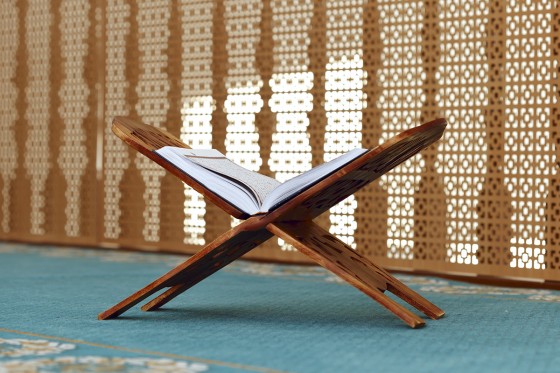 In addition to performing the prayer in congregation, it is also important to perform it in rows. For this reason, the Messenger of Allah (saw) paid great attention to the order of the rows and would not start the prayer without putting the rows in order. Rasulullah (saw) said, “Let your wise and mature pray immediately behind me, then those who trail behind them, and then those who trail behind them.” After mentioning this three times he warned us by saying “Avoid the hustle and bustle of the market places.”[3]. While forming the rows by paying attention to these warnings, it has been sunnah to rank the congregation gradually, starting with the wise ones, then the boys, older women and girls. Our Prophet (saw) often warned the Companions about the order of the row and said: “Why do you not stand in rows as the angels do before their Rubb?” The Sahaba asked, “O Messenger of Allah! how do the angels stand in rows before their Rubb?” Rasulullah (saw) then replied “They complete each row beginning with the first and filling all the gaps.”[4] In another hadith he stated: “Surely I see the devil coming among you like a black sheep through the gap in the line.

All this shows that the rows of salah must be in order. As a matter of fact, the Prophet (saw) said, “If the rows are not straightened in the prayer, Allah will cause dissension amongst the worshippers, thus making them turn their faces away from each other.” Failure to comply with the prayer row conditions causes many spiritual diseases. Praying by paying attention to the rows puts the congregation in the position of angels. Knowing this, the Messenger of Allah (saw) aligns the rows from right to left, pushing or pulling those who are forward or outward from their chests; He would fill in the gaps so that there would be no gaps in between and then start the prayer. The Companions created such rows that their clothes were always torn from their shoulders. Today, we witness that this sensitivity is about to disappear in congregational prayers in our mosques. Although it is an excuse for the community to stay away from the conditions of rows during salah due to the pandemic for more than two years, those mandatory conditions have now ended. From now on, a congregation should be formed in accordance with the row conditions determined in the sunnah and all kinds of unconcerned behaviour should be avoided. Adults, then young people and then children, no space should be left in such a way that the shoulders touch and squeeze each other, and there should not be a line in the back line while there is space in the front line.

This website uses cookies to improve your experience while you navigate through the website. Out of these cookies, the cookies that are categorized as necessary are stored on your browser as they are essential for the working of basic functionalities of the website. We also use third-party cookies that help us analyze and understand how you use this website. These cookies will be stored in your browser only with your consent. You also have the option to opt-out of these cookies. But opting out of some of these cookies may have an effect on your browsing experience.
Necessary Always Enabled
Necessary cookies are absolutely essential for the website to function properly. This category only includes cookies that ensures basic functionalities and security features of the website. These cookies do not store any personal information.
Non-necessary
Any cookies that may not be particularly necessary for the website to function and is used specifically to collect user personal data via analytics, ads, other embedded contents are termed as non-necessary cookies. It is mandatory to procure user consent prior to running these cookies on your website.
SAVE & ACCEPT
PHP Code Snippets Powered By : XYZScripts.com