IGMG divisions are constituted in terms of activities served in different fields and for different audiences; mentioned divisions sustain activities in cooperation with subdivisions formed within their own body. 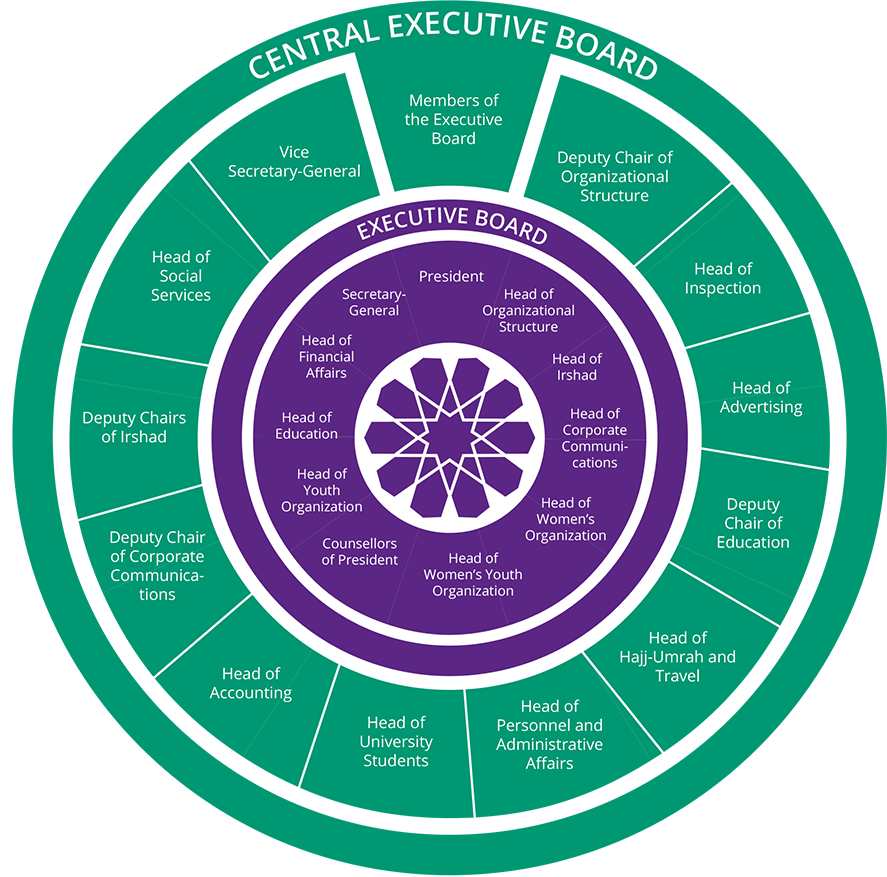 According to their respective tasks, services of the IGMG are either offered by the central administration or by the regional or local communities. The smallest units of our religious community are the local mosques. They provide basic necessities for the daily religious practices as well as comprehensive religious services. Beyond that, they serve not only for carrying out several educational and social activities but also meeting specific needs of target groups related to the Women’s, Youth and Women’s Youth departments.

The IGMG maintains its organizational services in Germany, France, Switzerland, Italy, Austria, Norway, Sweden, Denmark, the Netherlands, Belgium and the UK, as well as in Canada, Australia, Japan, Turkey, Kyrgyzstan and the US.

On the one hand, our regional units constitute a linkage between the IGMG Head Office and local units. On the other hand, they coordinate the work of the affiliated local communities. Besides this, they are responsible especially for the coordination of religious guidance and educational services and for the arrangement of cultural events. Our Head Office ensures coordination of all services, at both local and regional levels, and determines strategies in fundamental matters by preparing general work programs.

Head Office realizes follow-up of delivery of IGMG’s activities, which are extended to large masses, young and old alike, even to the branches, the smallest units, by planning and designing them. In this way, a maximum standard is obtained in services of religious guidance and education, and social and cultural activities carried out by regional units and branches. Moreover, with support of the regional units, central administration organises services which cannot be accomplished locally or regionally alone. Hajj (pilgrimage to Mecca), umrah, Udhiyyah campaign (sacrifice), fitrah and zakah organizations, prayer calendars are among such services. It is also Head Office that executes funeral services so as to carry out burial transactions in solidarity, and arranges appointment and education of imams. Furthermore, Head Office meets with the bibliophiles by way of a Book Club through which books on religious, cultural and social subjects are presented.

On the local level, the IGMG is active in 640 communities, 324 of which are in Germany. Adding women’s, youth, student, sports, cultural and educational associations to this number, IGMG maintains a total number of 2440 facilities and has 170.000 members. Taking into account the number of people congregating for Friday prayers, IGMG has a community consisting of 550.000 persons.