Islamic Community Millî Görüş (IGMG) is an Islamic community that gives comprehensive religious, social and cultural services. In this respect, our community presents various activities with the purpose of teaching, learning, introducing and practicing Islam and transmitting it to future generations, while fulfiling Islamic duties. IGMG represents its members in social, cultural and political areas, deals with all kinds of matters of Muslims, and carries out activities necessary for managing their living conditions and ensuring protection of their basic rights.

Quran and Sunnah are the fundamental sources which are decisive in IGMG’s understanding of Islam. In social and individual frameworks, Islam is a religion whose influence does not
end when one exits the mosque and which, imposes a personal and social responsibility on believers regarding certain moral principles in all walks of their lives. IGMG has a perception that practicing Islam should be experienced not according to certain regional or cultural traditions but to the Quranic criteria and Sunnah of our Prophet (pbuh), which considers variety in religious practices based on religious proofs (Quran, Sunnah, Ijma and Qiyas) as richness for religious and social life. Our members see themselves as basic elements of the society with which they live without neglecting the importance of keeping relations alive with their homeland. With the awareness of this, IGMG considers itself responsible regarding the peace and welfare of the societies in which it carries out activities. IGMG, being a part of the Islamic ummah at the same time, accepts responsibility, itself, to act sensibly regarding any problem faced by the ummah. 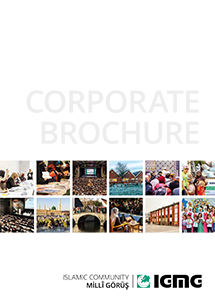 IGMG sides with the oppressed and the aggrieved with cognition of the responsibility for all mankind and encourages the improvement of basic human virtues such as good deeds and solidarity in opposing all kinds of oppression. This takes place within the midst of the search for solutions to the economic, political and social problems that people find themselves in the middle, and calls for a dialogue for exchanging ideas with political and social institutions in an effort to derive solutions for these problems. Acting with the Prophetic principles “Compete in doing good, and devotion to Allah,” “The most beneficent of people
is the one who is beneficial to the people,” and “Make things easy, not hard” our organization wishes to take these points, rather than controversial ones, as a shared basis, in social relations.

In the religion of Islam, there are collective obligations as well as individual ones and some can only be performed collectively. In parallel with this, protection of the poor and the aggrieved, struggling against injustice, elimination of evil by spreading goodness, and performing all kinds of social relations on the basis of justice renders necessary a collective effort, thus forming a community. The necessity of being a community also became an incentive factor in Muslims’ gathering under the roof of IGMG in Europe.

MEANING OF THE PHRASE “MILLÎ GÖRÜŞ”

According to Islamic belief, all human beings originate from Adam (pbuh), the first human being and prophet, and Eve, his spouse. Since Adam (pbuh) onwards, Allah (jj) sent prophets and books in order to show the right path to the mankind. As a ring in this chain of prophets, Abraham (pbuh) is the ancestor of followers of the belief in the unity of Allah (monotheist belief). In this respect, the name of our organization makes direct reference to Abraham (pbuh). The word “millî” derives from the word “millah” as a Quranic concept. Following verses are sources for usage of this concept (millah of Abraham) which is frequently cited in many places in the Holy Quran: Surah Nahl verse 123, Surah Al-i ‘Imran verse 95, Surah Nisa verse 125.

According to the Holy Quran, millah describes a community which believes in a prophet and gathers together around the values, ideals and practices brought by that prophet.

Therefore, the phrase “Millî Görüş” that describes the organization must be understood as a world view of an Islamic community, which accepts itself as belonging to the millah of Abraham (pbuh) in terms of outlook and belief and follows the path of Mohammed (pbuh), as an endeavour for peace of mankind.

In the 1960s, millions of Muslims from Turkey as well as other countries immigrated to Europe in order to work in Germany and other European countries. From the beginning of the 1970s, workers of Turkish origin gathered in small masjids in which they would perform prayer by grouping small communities. When coming to the 1980s, these small communities established regional units and federations by congregating. It became necessary for these organizations to establish a “head office” in order to fulfil various religious obligations such as carrying out mosque constructions, hajj and umrah organizations, procurement and education of officials like imams and those responsible for guidance. Faced with these necessities, Islamic Community Millî Görüş, was established in 1995, and outlined various programs according to social realities throughout the process which was shaped by economic and social developments in its time.

Today, IGMG has obtained its place among the biggest nongovernmental organizations in Europe, increasing in the number of regions, branches and members to which it delivers services through activities carried out in the framework of these plans and programs. As an organization that serves young and old alike, IGMG has around 2500 branches today together with the Women’s Organization, Youth Organization, University Students and Women’s Youth Organization. Being a long-established organization that serves in many European countries as well as in Australia, Japan, the US, Turkey, Kyrgyzstan and Canada, it continues its services non-stop to hundreds of thousands of people in 40 regions, 3 of which are enterprising ones, with around 20 thousand managers and 170 thousand members.