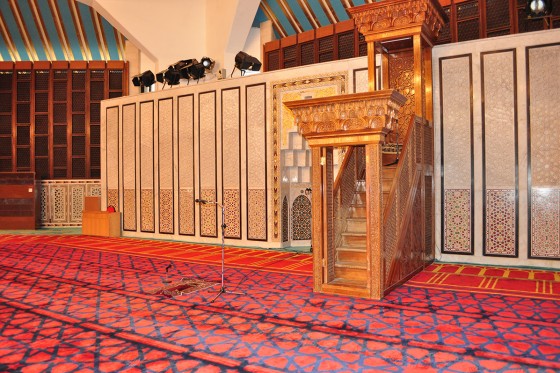 The event of Isra and Mi’raj took place In the 12th year of Prophet Muhammad (saw)’s prophethood. The Qur’an describes this great miracle that took place before the Hijra as follows: “Exalted is He who took His Servant [i.e., Prophet Muḥammad (ﷺ)] by night from al-Masjid al-Ḥarām to al-Masjid al-Aqṣā, whose surroundings We have blessed, to show him of Our signs. Indeed, He is the Hearing, the Seeing.”[1]

In order to silence the call of Islam, the Meccan polytheists knew no bounds in torture and persecution, and implemented a social and economic boycott against our Prophet Muhammad (saw) and his Companions. In these difficult days, our Prophet Muhammad (saw) sent his uncle Abu Talib, who always protected him, and his beloved wife, Khadija (ra) our mother. The polytheists, who thought that our Prophet was left without protection, increased their persecution and suffering even more. Seeking a way out, the Messenger of Allah (saw) went to Taif to convey Islam. But there, too, he was insulted and stoned. His blessed feet were covered in blood. At such a time when he needed comfort the most, Allah (saw) protected his messenger and granted him the miracle of Isra and Mi’raj.

In this miracle of ascension, the Messenger of Allah (saw) returned from the ascension to his ummah with three great gifts. Abdullah b. Mas’ud (ra) said: “When the incident of Isra happened, the Messenger of Allah was given three things: the five daily prayers, the last verse of the chapter of Al-Baqara, and the forgiveness of the major sins of those who did not associate partners with Allah.”[2]

One of the gifts of Isra and Mi’raj to the believers and the five daily prayers, which our Prophet (saw) called “the light of my eye”[3] should be the biggest motto of a Muslim’s daily life. It is an opportunity to remember Allah (swt), to remember and not to forget. Prayer is an opportunity to strengthen the bond between Allah and the servant. It is the spiritual ascent of the believer. Regularly performing prayers also makes a person of good moral character, honest, humble, merciful and just. Allah (swt) says; “Indeed, prayer prohibits immorality and wrongdoing.”[4] May Allah (swt) make us among those who are purified from their sins, perform the five daily prayers with the awareness of Isra and Mi’raj and reach the consent of Allah (swt).

As Islamic Community Milli Gorus, we remember those who have spent their lives serving Islam and humanity. We will honour with mercy and gratitude our elders, who served in our communities together with the leading figures of Islam, who served as congregations, administrators or imams, and those who we mentions and have passed away in our “Pioneers Before Us” programs that we organize every year in February. It is an important task for us to remember them well and to ensure that they are role models for future generations. Our programs will take place both face-to-face and online. We would especially like to remind you to follow and benefit from these programs. May Allah (swt) have mercy on those who have passed away. May each and every one of them attain Jannatul Firdaus.

May this night be instrumental in our spiritual ascent. Ameen!