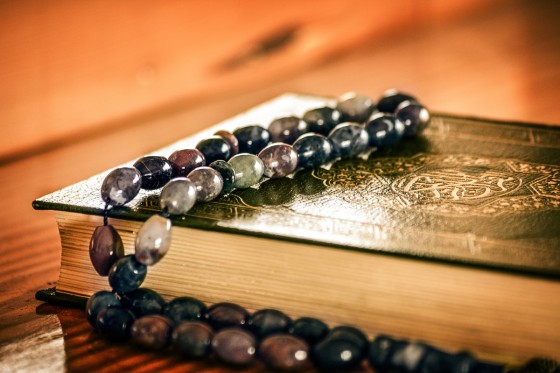 Ibrahim (as) questioned the belief system and attitudes of the pagan society in which he lived. The society worshiped idols and considered them as gods which was not appealing and did not satisfy Ibrahim (as). At this very moment, Allah (swt) said to him “Surrender” and Ibrahim (as) said “I have surrendered to The Lord of the worlds.”[1] Ibrahim (as) turned to the true religion and surrendered to Allah (swt), and gathered all good qualities in himself; He was a good servant who was always grateful for the blessings of Allah (swt). For this reason, he was chosen by Allah (swt) and was guided to the right path. Many beauties and a lofty positions have been given to him in this world, and he has been included in the category of righteous servants for the hereafter. He rebuilt the Kaaba together with his son Ismail, and showed humanity the pilgrimage. Qurban has also come through Ibrahim (as).

We believers, who believe in Allah (swt), His Messenger and the Last Day, are named as “Muslims” by Allah (swt). Muslim means to surrender. Allah (swt) says; “And who is better in speech than one who invites to Allah and does righteousness and says, “Indeed, I am of the Muslims.”[3] A Muslim is one who surrenders to the orders and prohibitions of the Qur’an and Sunnah. It is surrendering to Allah (swt) and everything that comes from Him.  Rasulullah (saw) said: “Strange are the ways of a believer for there is good in every affair of his and this is not the case with anyone else except in the case of a believer for if he has an occasion to feel delight, he thanks (God), thus there is a good for him in it, and if he gets into trouble and shows resignation (and endures it patiently), there is a good for him in it.”[4]

In the face of the difficulties, we face in life; “Why did this happen! Why did this happen to me!” We should avoid words that suggest rebellion, such as “There is blessings in this. This is how Allah has seen fit.” We must have the understanding. Just like Ismail (as), if we aspire to Allah’s approval, we should also consent to Allah’s will for us. Allah (swt) mentions in the Quran, “Allah is pleased with them and they are pleased with Him.”[5]

Tomorrow is Eid al-Adha, Today is the day of Arafah. Let’s visit the graves of those who have passed and make Dua for them. Let’s tell our children about the meaning and importance of Qurban. Let’s strengthen our surrender. I would like to congratulate you all on your Eid from now. May Allah (swt) make us one of his servants who surrender to Him.